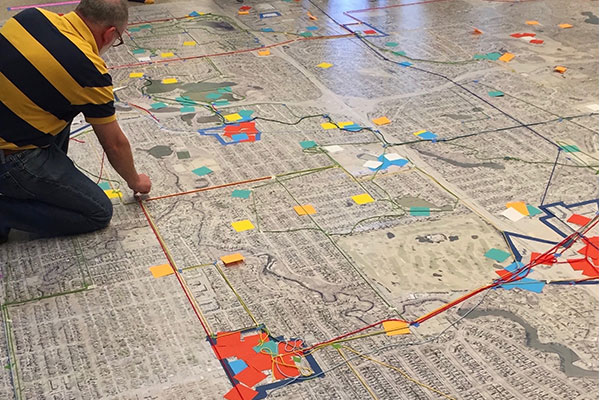 ‘Nodes and Modes’ was a term first coined during the Vision Edina planning process, facilitated by Future iQ in 2014-15. This concept has now evolved and developed traction in the comprehensive planning being undertaken in the City of Edina. Nodes and Modes is an innovative concept of tightly coupling together neighborhood development (Nodes), with multimodal transport connections (Modes). This concept is being pursued to enhance the characteristics and fabric of the Edina community, yet embrace urban renewal and targeted redevelopment. This concept is allowing community residents to map out future developments, including locations of potential industry clusters, new community neighborhoods and transportation connections. The concept of an enhanced medical and wellness cluster is being explored. The city is currently bisected by two major road corridors, and the Nodes and Modes approach is exploring how to reconnect portions of the city with concepts such as trail networks, new public spaces, and transport loops.

For more information, and to engage in further discussion regarding the Cities of the Future project, please contact: